Counseling at Safe Connections helped Angie detach from her abuser and reach a point where seeing him no longer provoked fear or anxiety. 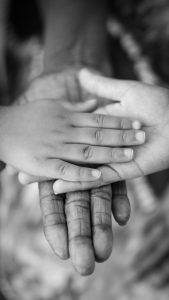 +Angie* grew up in an unsafe home where the main rule was, “Don’t upset Mom.” If mom got upset, Angie’s stepdad doled out the beatings. Angie married and left home as soon as she could manage it. Unfortunately, the charming high school boyfriend Angie selected for a husband slowly changed from charming to controlling to downright abusive. Everything that went wrong was all Angie’s fault. Her husband’s yelling and name-calling escalated to pushing, shoving, and to the point where he kicked her in the stomach even though she was pregnant. Angie did everything she could think of to avoid conflict. Nothing worked for long. She began having anxiety attacks and nightmares as her situation spiraled downward. For Angie, the final straw was when her husband pushed her down the steps. She called the police. She also called Safe Connections.

Once a week for several years she came to Safe Connections to gain strength and perspective. Eventually, Angie decided to divorce. At the same time, counseling at Safe Connections helped Angie detach from her abuser and reach a point where seeing him no longer provoked fear or anxiety. “I saw him walking outside the courthouse one day, and I didn’t panic. I felt confident and unafraid. And, I knew I would be able to keep doing what I needed to do.”

Over time, Angie and her counselor decided it was time to leave counseling. Today, there are no more nightmares, no more panic attacks. She is able to speak up for herself and her children. She sets boundaries and feels good about what she has accomplished. Angie is enjoying a healthy relationship with a man who she loves and trusts. She enjoys good neighbors and supportive family relationships. For Angie, the violence has ended.