I always felt like they didn’t care about me, they just wanted to get paid.

Ashley’s romantic high school partner turned out to be controlling and abusive, and her life turned grim quickly. “I had an abusive relationship with my first romantic partner in high school that was on again, off again until my junior year when I dropped out. Leaving school was the only way I saw of leaving the relationship without having to face continued abuse.” After dropping out of high school, Ashley began making decisions that were detrimental to her well-being.

She struggled to find help through counselors in her hometown, but she never found the right fit. “I always felt like they didn’t care about me, they just wanted to get paid.”

Ashley’s behavior affected her relationship with  her mother. Without a job or chances to meet people, she was suffering from extreme depression and battling suicidal thoughts. Then, she reached out to her dad in Illinois and he agreed to let her move in with him.  She settled in and they found Safe Connections.

The counselor worked patiently to gain Ashley’s trust. “I was so happy to find someone that didn’t want my money, but really wanted to help me.”

Group therapy helped her heal emotionally. “It was a good feeling not to be alone, to talk with women who went through the same thing. It was good to hear facts and statistics that validated how we felt in our heads.” 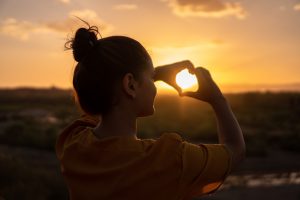 It’s been a little over a year since Ashley first met with a Safe Connections counselor. Then, her isolation slowly faded and she found the confidence to enroll in college and begin a new life. She studies psychology at Illinois State University and hopes to share what she learned with other people.

“I feel good.  I’ve established new friendships and feel safe and confident on campus.  I’m rushing for a sorority and joined a softball team. Life is way better.”

If Ashley is having a bad day she pulls out the binder with all the stuff she learned in group therapy. She says, “It’s like a little pep talk on paper.” It helps to have a great support system to whom she can open up about feelings that surface during therapy. She finds that yoga and breathing exercises also help her deal with stress. Additionally, she uses grounding exercises on YouTube to help keep her in the moment.

“I’ve met people on campus who struggle with depression, and they are scared to seek help because of what people will think.” I try to convince them that they are worth it.

“We all deserve to be well.”